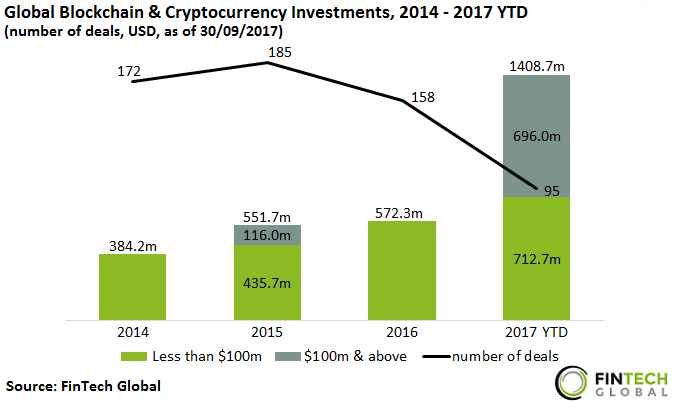 Companies in the sector received $1.4bn in the first three quarters of this year, more than double the total investment in 2016

Investments in companies specialising in Blockchain & Cryptocurrencies increased year on year at a 14.2% CAGR between 2014 and 2016. So far, 2017 has been particularly successful for the sector with $1.4bn worth of investment so far. Almost half of the funding in the first three quarters of 2017 went to deals valued $100m and above. Despite the large increase in large deals, the amount raised from deals valued below $100m has already surpassed last year’s total with $712.7m invested.

Despite the large increases in funding the number of deals looks set to fall for a second year running. In line with this fall, the average deal size in deals valued under $100m increased at a CAGR of 41.9% between 2014 and Q3 2017. Digital Currency Group invested in 13.1% of all deals to the Blockchain & Cryptocurrency sector since 2014