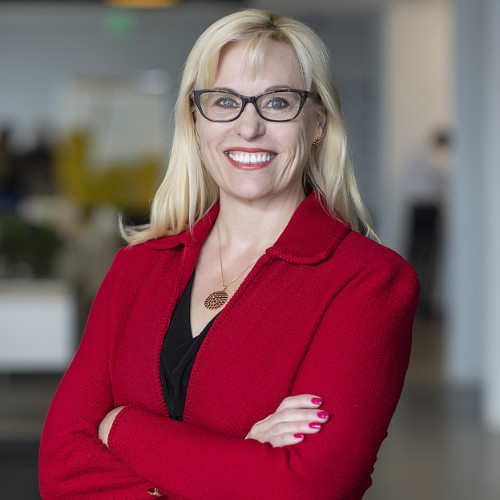 Jacqueline D. Molnar is the Chief Transformation Officer at Western Union, responsible for stewarding the Company through the development, execution and implementation of its global strategy. In this role, Molnar is establishing a foundation for transformation by focusing on organizational culture to advance the way the Company works, with distinct effort on operational management and providing governance to support delivery of strategic initiatives. She is based in our global headquarters in Denver, Colorado.

In Molnar’s twenty years of experience as an attorney and compliance officer, she has focused her practice on AML/CTF, Sanctions, Anti-Bribery/Corruption, Consumer Protection, Fraud and Litigation Defense. She has led large international teams in the successful development of global AML programs across multiple jurisdictions and has represented numerous Fortune 500 companies in complex legal and regulatory matters across the globe.

Molnar also serves as Chairman of the Board of Directors for the Western Union Foundation, an organization that supports education and disaster relief efforts as pathways toward a better future and has given over $131 million in 174 countries since its inception in 2001. Molnar sits on the board of directors for Western Union Payment Services Ireland Limited (WUPSIL), a subsidiary of the Western Union Company, as well as the WUPSIL Risk Committee. She also sits on the board of directors for Denver Public Schools Foundation.

Prior to joining Western Union in 2013 as Senior Vice President and Deputy Chief Compliance Officer, Molnar served as Vice President, Associate Global Anti-Money Laundering Officer at Toronto Dominion Bank Group in Toronto, Canada. Prior to joining TD, Molnar was Vice President, Assistant General Counsel at Wells Fargo & Company in Charlotte, North Carolina. She also practiced law at Gibson Dunn and at Latham & Watkins LLP in Silicon Valley, California, and at Herbert Smith Freehills in Sydney, Australia. Molnar received her Doctor of Jurisprudence and her Bachelor of Education from the University of Hawaii and teaches AML Compliance Law at the William S. Richardson School of Law in Honolulu. Molnar clerked for The Honorable Harold Fong at the Federal District Court for the District of Hawaii