Digital banking company Fidor has appointed a new global CFO ahead of its international expansion plans.

Brad Whittfield will take on the newly-created role based in Fidor’s Dubai global expansion hub.

He previously held senior positions at KPMG and PwC and has operated across Asia-pacific, Europe and most recently, the Middle East and Africa.

Fidor works alongside banks and non-financial organisations to help them design and build digital banking offerings.

Whittfield’s will focus on overseeing and continuing to expand Fidor’s global reach around Europe, the US, Asia and the Middle East.

Fidor’s CEO and founder Matthias Kroner commented: “The appointment of Brad demonstrates the investment of the Fidor Group to further strengthen its executive team in supporting its global expansion strategy.

“The role of CFO is a key role to any FinTech as it focuses on ensuring both growth and sustainability.”

Holvi teams up with SumUp to serve German SMEs 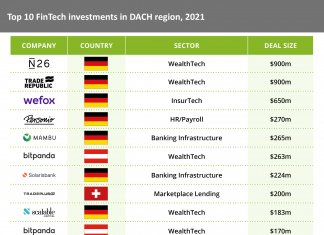