FinTech Global
Home Industry Research US companies completed half of the Top 10 FinTech deals in Q3... 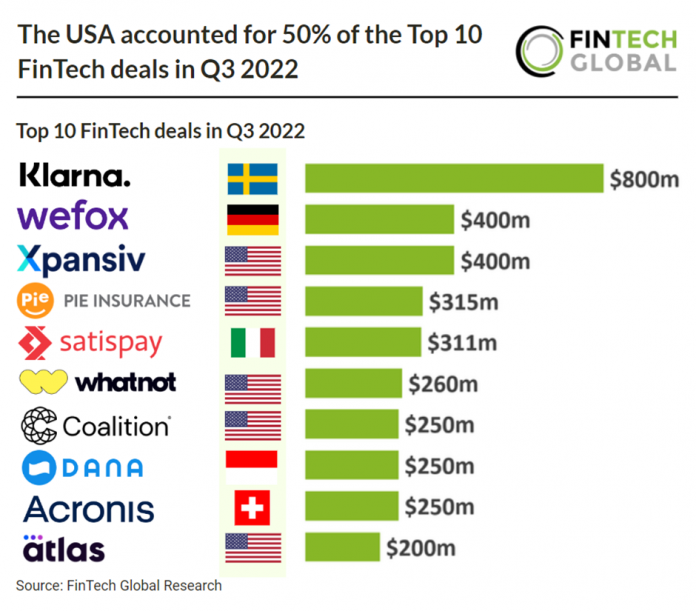 • Deal sizes have plunged in Q3 compared to previous quarters and only Klarna’s $800m deal would make it into the top 10 deals during the first nine months. This is mainly due to major reductions in the public markets which have now been realised in the private sector, as investors revalue their current portfolios. Investors are now unwilling to commit to huge deals over $1bn that we have seen in 2021 and early 2022. The InsurTech and PayTech sectors accounted for the most deals in the list above with three each and the USA was the most dominant country with five representatives on the list of the top ten deals in Q3.
• Klarna, a BNPL service provider, completed the largest FinTech deal in Q3 2022 raising $800m in their latest Venture funding round which brought their total funding to $4.5bn. This came in at a new valuation of $6.7bn, an 85% drop from their previous $46bn valuation. Klarna said its peers were down 80-90% from peak valuations and so its own decline since June 2021 was on par with them. Klarna received contributions from existing investors like Sequoia and Silver Lake. More participation came from funding company Mubadala Investment Company. The company plans to use the funds for further expansion in the USA. According to Klarna, it now has nearly 30 million users in the States.