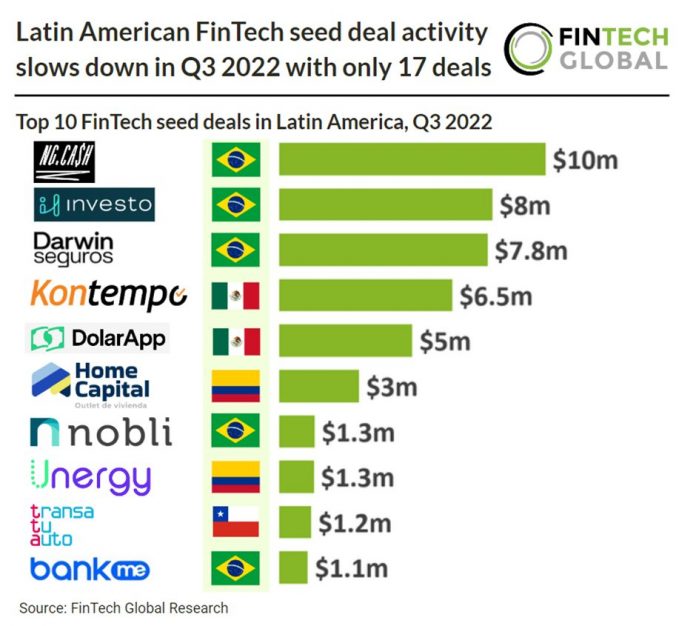 • Latin American companies announced 17 FinTech seed deals in Q3 2022, a 32% decrease from the previous quarter. Overall FinTech seed deal activity in Latin America is expected to reach 105 deals in total during 2022.
• WealthTech was the most active sector accounting for six deals in total, a 35% share of total deals in Q3 2022. Brazil was the most active FinTech seed country in Latin America with seven deals, a 41% share of total deals and was closely followed by Mexico which had six deals. Brazil has opted for a fully regulated open banking model. Phase 4 began on Dec 2021 and is expected to run until Dec 2022. The latest stage is marked by the beginning of open finance and will allow the exchange of data from investments, pensions, and foreign exchange services. Whilst Mexico have opted for a regulatory path similar to that of Europe, where the open banking initiative is quite advanced but the implementation deadlines are not yet clear.
• NG.CASH, a next generation digital wallet, was the largest FinTech seed deal in Latin America during Q3 2022 raising $10m in their seed round led by Andreessen Horowitz and Monashees. NG.CASH allows customers to open a free digital wallet that receives a scheduled monthly allowance to help the new generation become financially independent. The company will use its new capital to add new features to its platform and scale its team of collaborators.